“If peace is what every government says it seeks and peace is the yearning of every heart, why aren’t we studying it and teaching it in schools?” ~ Colman McCarthy

Q: Are they releasing all the prisoner who have been imprisoned because of pot?

“Groove on! Groove on!” blared from speakers outside a gray warehouse in Santa Ana. Inside, a line of 60 people snaked through the shop, waiting to be helped by a budtender.

I have friends in real life and on Facebook who ask the question daily “What are you grateful for and what makes you happy today?”

What I am grateful for and what makes me happy is the profound, usually unexpressed, life-sustaining love between people — family, friends, co-workers, bosses, neighbors and even those we don’t know and haven’t met yet — on whose existence and livelihoods we in part depend every day.

This is my Hallmark Card (Hallmark: … 2. a distinguishing characteristic, trait, or feature — Webster) to my wife hidden neatly away on my blog that she’s bound to discover at some point accidentally or incidentally or some way like that.

My friend and I mull over the teas
displayed in square jars
with beveled glass labeled by type.
Each name seems part of a haiku:
“After the Snow Sprouting.” “Moon Palace.”
“Mist Over the Gorges.”
I’m drawn to green teas
with unoxidized leaves that don’t wither,
hold their grassy fragrance
like willow under snow in winter. END_OF_DOCUMENT_TOKEN_TO_BE_REPLACED

“Until we stop harming all other living beings, we are still savages.” ~ Thomas A. Edison

“One is called to live nonviolently, even if the change one works for seems impossible. It may or may not be possible to turn the US around through nonviolent revolution. But one thing favours such an attempt: the total inability of violence to change anything for the better.”  ~ Daniel Berrigan

I’ve decided to include quotations that I like and that I receive from Pace e Bene here on my blog. This is another one of those.

If only people watched, sung about, and worshiped the Sun and Moon and the Earth and the rest of Nature and the universe everyday as much as they do on days when they happen to align for a couple of minutes like they did yesterday, Aug. 21, 2017. A cosmic testament to the ancient short attention span of the human race.

An anomaly is defined as “something that deviates from what is standard, normal, or expected.” An eclipse is to be expected. Even surprising things are to be expected from Mother Nature, Earth Mother.

“When you come out of the storm, you won’t be the same person who walked in. That’s what this storm’s all about.” ~ Haruki Murakami

What is he thinking?

Is that what people watch on their living-room-wall-size tv’s?

Brian Williams: “We see these beautiful pictures at night from the decks of these two U.S. Navy vessels in the eastern Mediterranean,” Williams said.

“I am tempted to quote the great Leonard Cohen, ‘I am guided by the beauty of our weapons.’ And they are beautiful pictures of fearsome armaments making, what is for them, a brief flight over to this airfield.”

Why not quote MLK?: “I believe that unarmed truth and unconditional love will have the final word.” MLK, Jr. Let’s get a grip, people.

It’s the birthday of Judy Blume, born in Elizabeth, New Jersey (1938), the best-selling author of more than two dozen books for young people.

She was 27 years old, with two preschool-aged children, when she began writing seriously. For two years, she received constant rejections. Then in 1970, she had her big breakthrough, with the young adult novel Are You There God? It’s Me, Margaret. It’s the story of 11-year-old Margaret Simon, the daughter of a Jewish father and Christian mother, and her adolescent attempts to make sense of things like religion, boys, and menstruation. The book was banned in many schools and libraries. It’s one of the most challenged books of the last third of the 20th century. But it’s also beloved by many, and it has been a big best-seller over the years.

She lives mostly in Key West, where she writes at a desk facing a garden. In the summer, she writes in a small cabin on Martha’s Vineyard. She always writes in the morning. When she’s working on a first draft, which she says is the hardest part, she writes seven days a week, even if only for an hour or two a day.

Sunday, January 1, 2017
“To be truly radical is to make hope possible rather than despair convincing.”
~ Pamela Haines, Philadelphia Quaker

I get these great inspirational emails from paceebene.org. Check them out. They’re good for a lot more than inspirational quotes, too.

Isn’t one of the government’s responsibilities to keep their people safe? It’s ironic I think that we seem to be so often at odds with the very powers that are supposed to keep us safe, fighting their actions that jeopardize the peace we work so hard to maintain.

From a spark to a flame.
Was it a spark that caused all this?
The Sun? The suns beyond our own?
Or two sticks being rubbed together
By two gods somewhere out there, or two worshipers —
Beyond our solar system, beyond our galaxy,
Beyond what we call the universe — somewhere
some say it was but a particle, a “God particle” —
“A particle?” you ask? Yes and it’s in a 17-mile long
subterranean vacuum tube somewhere in Switzerland.
If there were a god, I’d like him to be Swiss, carrying
a knife with a toothpick and tweezers.

I learned about this work from a Twitter post #Pebbles – a story of refugees in stones by Syrian artist Nizar Ali Badr.

What gorgeous work from sculptor Nizar Ali Badr. If you have problems reading French, please visit the link at the bottom of this blog post and copy and paste into translate.google.com and look at all the photos of some of his sculpture work while you’re there. It’s beautiful. 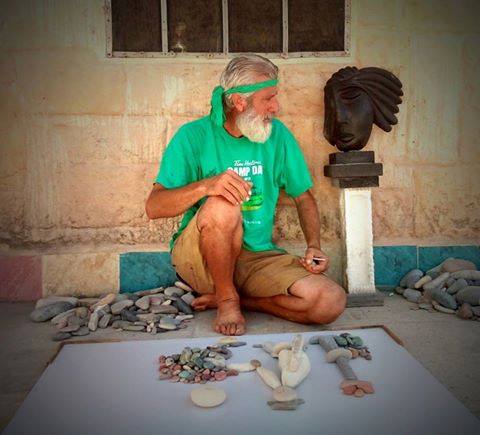