We have to address our fiscal problems using math, not magic. President Obama received a mandate from voters to ask the wealthiest Americans to pay their fair share. Instead of trying recycle and repackage their failed plans, it’s time for Republicans to stop holding middle class tax cuts hostage and start making a deal.

What I will not do is to have a process that is vague, that says we’re going to sorta-kinda raise revenue through dynamic scoring or closing loopholes that have not been identified. And the reason I won’t do that is I don’t want to find ourselves in a position six months from now or a year from now, where low-and-behold, the only way to close the deficit is to sock it to middle-class families. 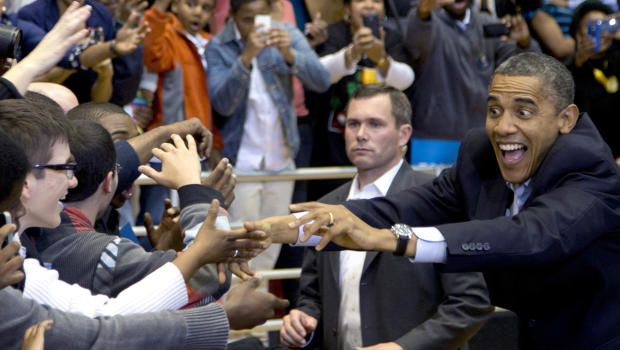 Pollsters and pundits in the United States may be hedging their bets, but a bookie in Britain is paying out even before the presidential race is over. Paddy Power, Europe’s largest book-maker and one of the big “bet shop” chains in Britain where they’ll bet on anything has decided that President Obama has already won reelection, and is handing over cash to those who placed bets on him.

This presidential election arrives five years into a severe economic crisis that both Republican and Democratic policies failed to end. The latest unemployment rate (7.8 percent) is not even halfway back to the 2007 level of 5 percent, from the crisis high of 10 percent. Jobs have not recovered, but corporate profits and the stock market did, thanks to huge government bailouts. Average real weekly earnings of most workers fell 2.4 percent from October, 2010, to the present – during what business, media and political leaders enjoyed calling a “modest recovery.” That 2.4 percent real wage drop means that workers lost the equivalent of six days’ wages (one week and one day) per year between late 2010 and now. Income and wealth inequalities thus deepened further across the crisis. No end of these developments is in sight.

For more on this story, visit: Silences Louder Than Their Words: Effective Economic Policies Neither Candidate Advocates | TruthOut.

Paid for by the Jewish Council on Education and Research