I suppose that he can’t be much worse than Timothy Geithner, but that should be scant cause for cheer over the news that the president has nominated Jack Lew as Treasury secretary. Both championed the financial deregulation craze of the Clinton administration, and both are acolytes of Robert Rubin, the former Clinton Treasury secretary who unfettered Wall Street greed and then took his own considerable cut of the action. 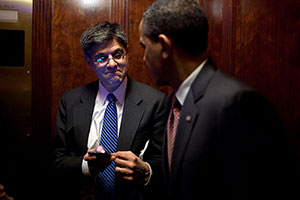 Rubin went to work at Citigroup, the world’s largest financial conglomerate whose legality was enabled by legislation he advanced while in government. He made off with a salary of $15 million a year during his decade at that bank, which specialized in toxic mortgage derivatives and had to be bailed out by taxpayers to avoid bankruptcy.